Whisky is made from the barley and matured in oak casks.  The quality of the cask has a large impact on the flavour and characteristics of the whisky. Peat is used at various levels to add additional flavour to this barley/oak partnership. Depending on how whisky is produced there are four main classifications. 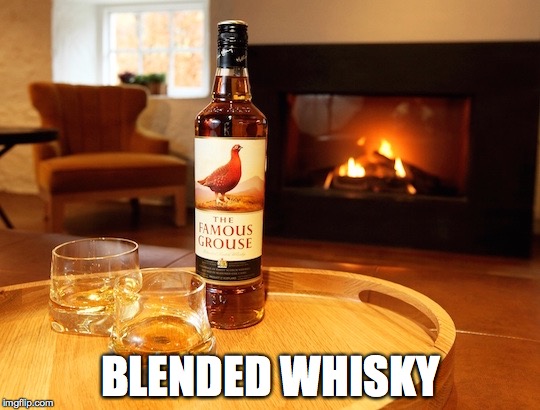 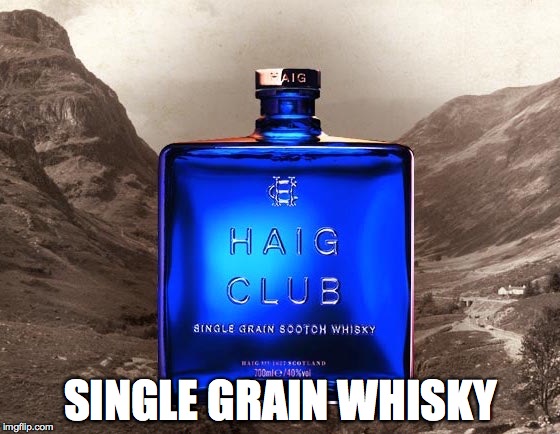 Single grain whisky is made from non-malted grains such as corn – this can give them a distinct character. 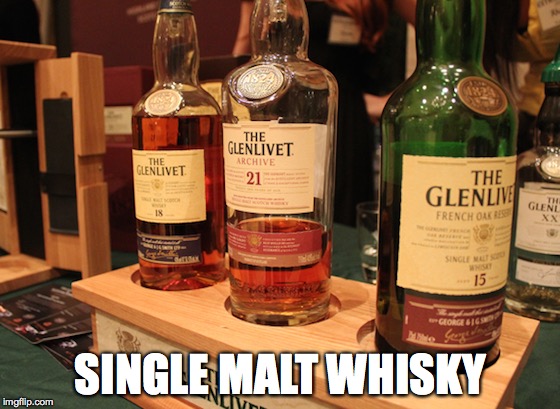 Single malt whisky is made from malted barley grains from a single distillery. 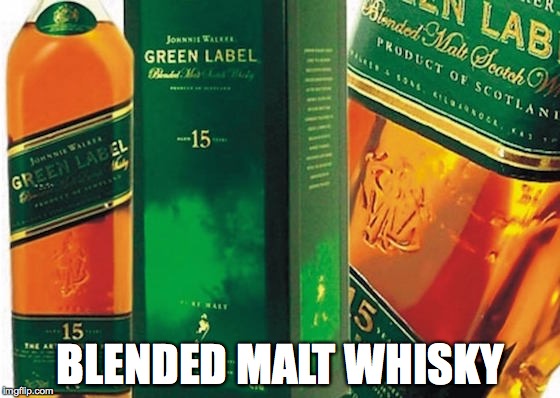 Sometimes also called ‘Vatted Malts’ or Pure Malts – these are made from a combination of malt whiskies from different distilleries.

There are over 100 distilleries in Scotland – and these can be split into five different regions: the Highlands, the Lowlands, Speyside, Islay and Campbeltown. Each region has a generalised style or character based on the prominent production methods used in that region.

Until the late 1960’s, malt whisky was made using: barley, water, yeast and peat. Distilleries used a large amount of peat to dry and malt the barley. The malting process allows the barley to sprout just enough to convert the starches into sugar – heat is then used to stop the germination. Malting is a labour intensive process –  with the development of large scale malting, it became possible to produce quality malted barley without the use of peat. 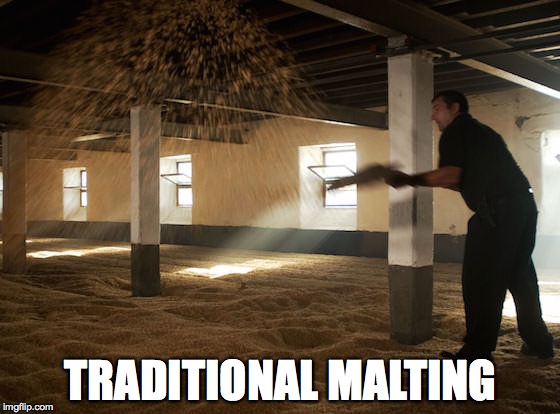 The speyside and lowland distilleries were the first to convert to non-peated whiskies, while other areas such as Islay maintained the tradition of using peat. The influence of peat can be measured in phenol parts per million (PPM). Different whiskies have different phenol levels. 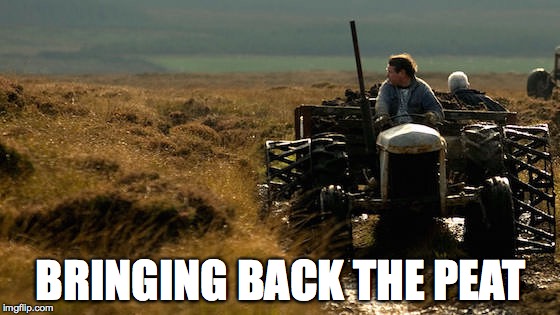 Scottish malt whisky is typically distilled twice in copper pot stills. Copper is important because of its malleability, heat conduction and catalytic properties. It is difficult to create alcohol above 15% with natural fermentation. Distillation is used to increase the percentage of alcohol – fortunately alcohol evaporates more rapidly than water. In the wash still the wort is distilled from 7-10%ABV  to 15%-20%. The low wines are then distilled a second time in the spirit still.

During the second distillation run, the distilller allows the “head” or “forecast” to run back into the wash still.  When the distillate clears the desirable spirit is known as the “heart” and via the condenser and spirit safe goes into the spirit receiver – ready to be put in casks. The distiller must ensure that the collection of the spirit ceases before the undesirable materials in the “tail” or the “feints” start emerging.

The shape of the  spirit still is also critical to quality and character of the spirit. Stills can be tall and thin – Glenmorangie stills are 17ft high and the tallest in Scotland – or short and dumpy. The bases of some stills are almost spherical in shape, while others have a broader or flatter profile.  If a distiller would like to make more whisky – they will bring in an identical still rather than a bigger still to help maintain the character of their spirit. 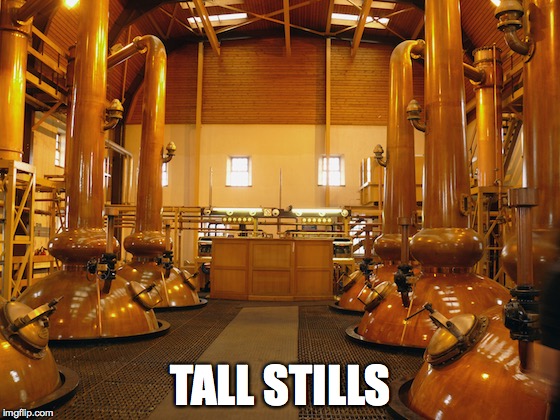 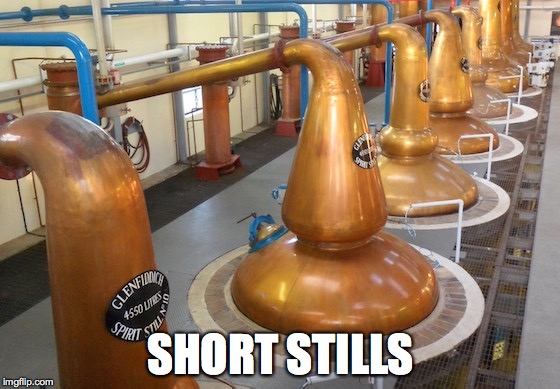 Whisky matures in the cask not in the bottle. The whisky cask itself has the biggest impact on the flavour and colour of whisky.  To be called Scotch whisky by law it needs to be matured in a cask for at least 3 years. Only oak wood is suitable for cask production. American or European oak is typically used.  American white oak grows faster and has a mellower, finer and more contained aroma, while European oak provides full, intense aromas and more tannins.

From the 17th century, Scotland imported Sherry, Port and Madeira from Europe which was shipped in oak casks and bottled in Scotland. As empty oak casks piled high at the ports, distillers keen to make a saving, would buy the empty casks to store whisky. Soon they discovered the longer it was stored the better it got!

During the Spanish civil war of the 1930s  it was much harder to get sherry oak casks. Fortunately Bourbon barrels are also made from oak.  As a further stroke of luck, after prohibition in 1935, the powerful cooper unions made it a federal law that bourbon casks can only be used once. The Scottish whisky industry jumped at the chance to buy cheaper casks. Today around 90% of all whisky is matured in American bourbon casks. 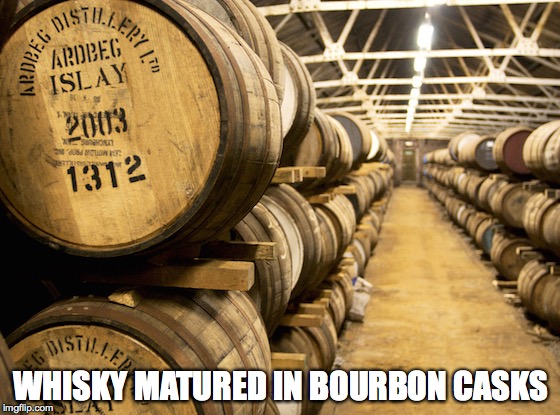 Bourbon barrels are charred – the inside of the cask is set on fire for a short period of time, which creates a black charred layer. Different levels of ‘charring’ will change the spectrum of flavours as vanillin, lactones, “smokiness”, spice notes and tannins are imparted into the whisky. Below the charred layer, heat on the wood unlocks natural sugars in the wood that will be released into the whisky over time as caramel flavours. The charred surface also helps filters the new spirit.

Sherry casks are toasted rather than charred.  It is accepted that sherry casks impart more flavour into the whisky. Many whiskies are matured in a bourbon cask and then ‘finished’ in a sherry cask for the last few months or years.

A cask can only be used to mature whisky so many times before it loses its magic – at which point the distiller will consider moving the whisky to a more active barrel.

New spirit can have an unpleasant taste, with age this unwanted taste diminishes until after 5-8 years it is gone. With time more flavour (vanilla, toffee and oak) from the cask is added to the whisky. Different casks reach their peak at different times – the point when the character of the whisky and the flavour that the cask imparts are perfectly matched. Thankfully it is the job of the distiller to judge this timing. Each year the percentage of whisky 1-3% evaporates is called “the Angels Share”. Thanks to the angels this makes older whisky progressively more expensive.

Some of the best whiskies have no age statement, but allow distillers to best manage stock and quality levels.

When it comes to enjoying flavours – our mouth gets the credit, while our nose does all the work. When it comes to flavour our tongues are crude receptors while the real action, complexity and pleasure comes from the back of nasal cavaities.  Aroma – remember take a good sniff of your whisky. A tulip shaped glass will work best to capture the aroma. 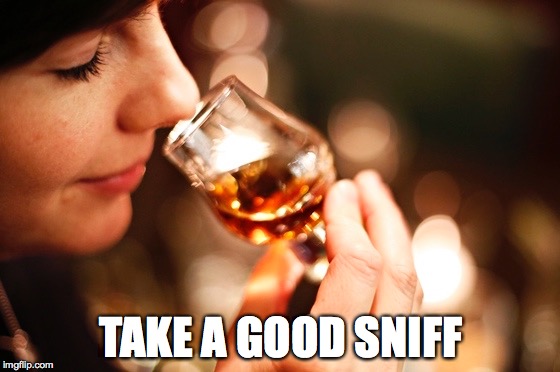 Colour – a golden-hued was likely matured in sherry oak while a paler whisky may have been matured in a bourbon cask – but it is not always the case.

Taste – Sip from the glass, letting the single malt rest on your tongue. Savour it in your mouth to get the maximum flavour and benefit. Different parts of your tongue and mouth respond to different flavours so swash the whisky around to gain maximum effect.

The Finnish – The finish is the after taste that comes once you have swallowed the whisky. Some people say that the complexity of the finish in whisky is what differentiates it from all other spirits. Once you get passed the alcoholic burn, then numerous flavours can reveal themselves, some of which can be extremely subtle.

Water – adding a little water is recommended to unlock some of the flavours – and to dilute stronger whiskies to reduce the alcoholic burn. Only add a very little at a time.

Enjoy your whisky  and  raise a glass to the American coopers in the bourbon industry – their barrels have helped build the Scottish whisky.